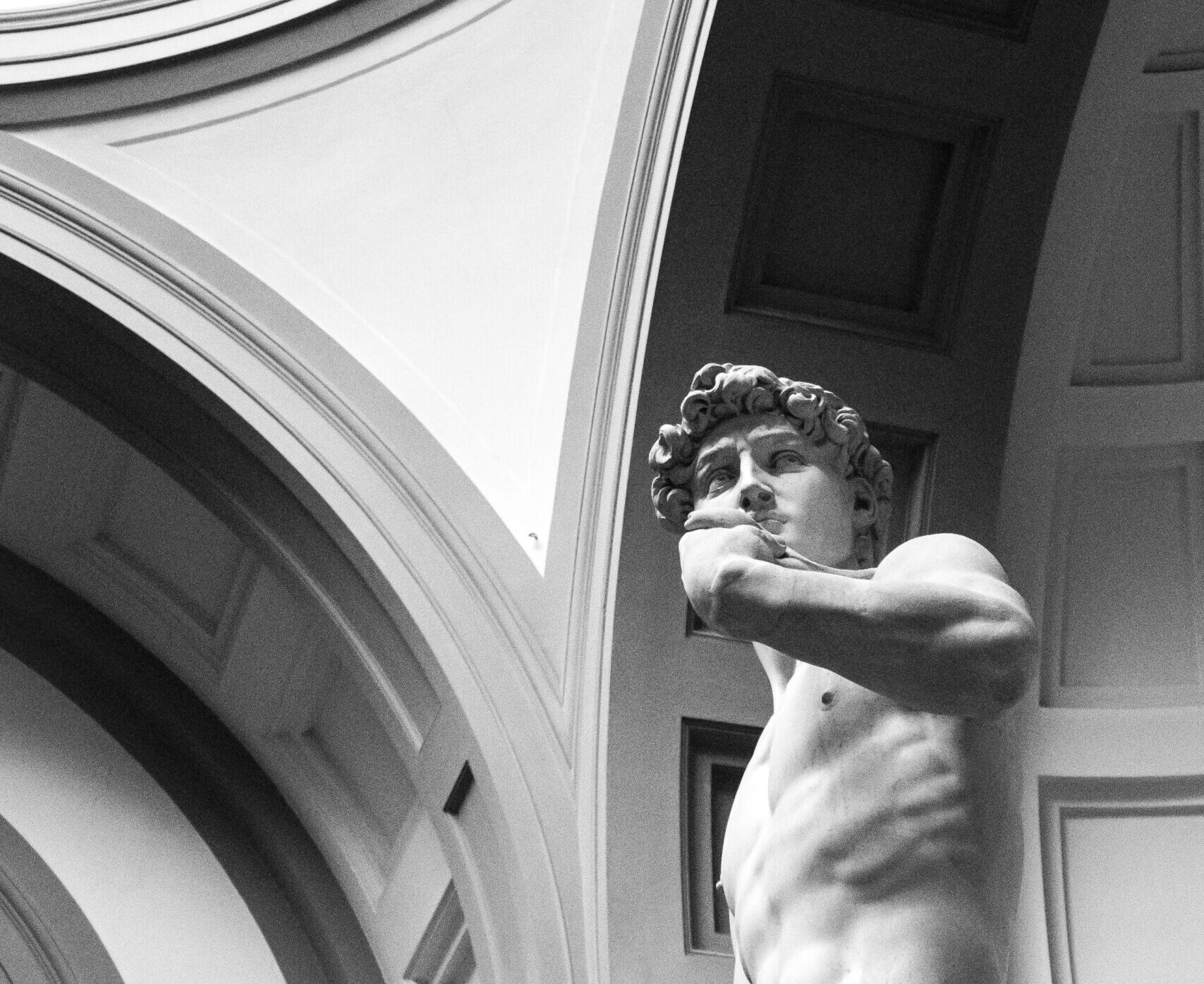 Linda and I just returned from taking our oldest granddaughter Annie to Europe, as a high school graduation present. We got lots of Good Grandparent points and our Grandparent stock is pretty high right now. One of the highlights of our trip was a visit to the Vatican Museum and the Sistine Chapel, along with about 100,000 of our closest friends – I will admit, gentle reader, the crowds were tough.

“In the room, the women come and go Talking of Michelangelo.”
-T. S. Eliot.

Linda and I have visited the Sistine Chapel several times in the past and I have taught the Renaissance at Rollins and Valencia so we have a good familiarity with the history and the art on display. The Sistine Chapel is named for Pope Sixtus IV who restored it between 1477 and 1480. It is always stunning and the story of Michelangelo’s work on the ceiling is remarkable. If you have an interest, you may want to read Michelangelo and the Pope’s Ceiling, by Ross King. Michelangelo was only 33 years old when he began the ceiling and 37 when he finished it, working between 1508 and 1512. He initially refused Pope Julius II’s command to paint the ceiling and ran away to Florence to avoid it. However, the “Warrior Pope” sent a posse after him and brought him back to Rome where, with great reluctance, he agreed to paint the ceiling, with the stipulation that he would design the work himself and not rely on the ideas of others. He was a fairly crusty fellow and considered himself to be a sculptor, not a painter, and had never worked in fresco. One of his more difficult initial problems was designing and constructing a scaffold from which to paint the ceiling and, standing alone, the scaffold itself is an engineering marvel. So, for the next four years, he worked from a very uncomfortable and sometimes painful leaning position, some 65 feet above the ground, creating one of the great masterpieces of the Western World.

Michelangelo returned to the Sistine Chapel some 25 years later at age 59 and spent the next seven years painting the magnificent and powerful Last Judgment on the far wall of the chapel. I have a PowerPoint presentation on the Last Judgment so if you would like a presentation for your management team or your group, let me know.
I knew that Michelangelo was a sculptor (see David and the Pieta) and I knew that he was a painter and an architect (see the Dome of St. Peter’s Basilica). I also knew that he wrote poetry and was something of a musician. What I did not know was that he wrote some very astute commentaries on life and, in particular, on management. Here is one of my favorites:

“The greatest danger for most of us is not that our aim is too high and we miss it, but that it is too low and we reach it.”

A similar notion has been suggested by other people over the years, which is the idea that it is possible to set our goals too low, thereby growing satisfied and perhaps complacent with less than our best so that we never reach our highest potential. The English poet Robert Browning captured this thought when he wrote that a person’s “reach should always exceed his grasp.” In a speech to the Orlando Economics Club, British Prime Minister Margaret Thatcher offered similarly wise advice by commenting, “Set your long term goals early, and do not be deterred by short term difficulty.” I like that. In our time, Sam Walton of Wal-Mart fame wrote, “I’ve always held the bar pretty high for myself: I’ve always set extremely high personal goals.”

World-class athletes know that they perform better against the better players, and may sometimes “play down” to the level of a team that is not as good. Professional racing driver Danica Patrick has said, “Take those chances and you can achieve greatness, whereas if you go conservative, you’ll never know.” Track and field Olympian Wilma Rudolph remarked that “… the potential for greatness lives within each of us” and All Universe basketball legend Michael Jordan said, “I’ve failed over and over again in my life and that is why I succeed.”

So, if Michelangelo, Robert Browning, Margaret Thatcher, Sam Walton and world-class athletes like Danica Patrick, Wilma Rudolph, and Michael Jordon are right, we will achieve our highest success if we stretch ourselves further than we think we can, perhaps experiencing a bit of discomfort, anxiety, and uncertainty along the way. One of my clients calls these goals, “stretch goals.” If we set our sights too low, it is likely that we may have a modicum of success but will not reach our highest and greatest potential. Or to paraphrase Michelangelo, “Better to aim too high and miss than to aim too low and hit.”

In my mind’s eye, I can imagine that if we were to corral Michelangelo around a dark wooden table in a half-lit Roman tavern, he might have these things to say about aiming high in our management goals and objectives. See what you think!

1. Most of us can do more than we think we can do. Michelangelo did not think he was up to the task of painting the Sistine Chapel ceiling and was depressed and angered that the Pope had asked him. He wanted to sculpt, not paint, and his colleagues Raphael and Bramante hoped that he would fail. When he completed the ceiling, in spite of never having done anything like this before, he had reached artistic plateaus that he had not even imagined. “You can if you think you can.”1

2. It’s okay to differ from the boss on occasion. Differing with the boss is ok if you do so graciously and if you clearly and specifically articulate your position. Good bosses want employees who take the initiative and who challenge them periodically. Someone once wrote, “Iron sharpens iron.”2 Michelangelo did not want to paint the Sistine Chapel and he told this to Pope Julius II in no uncertain terms. However, when the dust settled and he had his say, he did want the Pope wanted him to do, which was paint the ceiling.

3. Just because you haven’t done it before doesn’t mean you can’t do it now. Michelangelo was a sculptor and had never worked in fresco. But he learned how to do it and the result is the Sistine Chapel ceiling. Fresco is the process of working with wet plaster where the colors penetrate and become fixed. And the artist can work only on the amount of plaster he can complete in a day. If there is a problem, you have to chip out the day’s work, lay new plaster and begin again. A good manager knows that if things aren’t working, sometimes you have to abandon a project and begin again. The last 7 words of a dying company are, “We’ve always done it that way before.”

4. Take ownership of your work. Michelangelo agreed to paint the ceiling on the condition that he would design it himself and not rely on the ideas of others. Pope Julius II wanted him to paint rather static scenes from the Old Testament, one after the other, but Michelangelo’s idea was to paint multiple key scenes from the Book of Genesis, from the Creation to the Flood, with supporting characters, using contrapposto and creating energetic, fleshy, muscular, full-bodied images, virtually bursting with tension. “Imagination is more important than knowledge.”

5. Get to work with an intense, laser focus and unqualified dedication to excellence. Michelangelo did not keep track of time and did not work 8:00-5:00. He climbed to the top of the scaffold and worked until he could no longer hold his hands above his head, then went home, collapsed into a troubled sleep, then came back and did it again the next day, not even stopping to take a bath. It is said that once when he collapsed from exhaustion, they had to cut his boots and his clothes off of him, because they were stuck to his skin. “Excellence, then, being of two kinds, intellectual and moral. Intellectual excellence . . . owes its growth to teaching, while moral excellence comes about as a result of habit”

It could be that most of us will never achieve the artistic or management heights of Michelangelo, but it also could be that if we study the principles that led him to those heights, we might also go as Captain Kirk said, “Where no man has gone before.”

Please contact your Seay Management Consultant if you have any questions about Human Resources Management or employment issues or need management advice and guidance on other key employee issues. We appreciate having you as a valued client of our firm and look forward to talking soon. And aim high!

Thank you for filling out our contact form. A consultant will be in touch with you shortly.